Ghee has been used in Ayurvedic medicine for centuries to provide healing properties and promote health. It has been gaining popularity as cooking fat especially among people who follow paleo and ketogenic diets. What makes ghee different from regular butter or other cooking oils and fats is that it has higher smoke point. Smoke point of ghee is 480 F compared to regular butter or olive oil which is 350 F and 320 F respectively. This is due to the process of making clarified butter which involves heating regular unsalted cow’s milk butter at medium temperature until milk solids are separated and removed. Absence of milk solids makes ghee to be one of the best cooking fats at high temperature. When cooking with oils and fats at temperatures higher than their smoke point, harmful free radicals are produced. These free radicals damage cells in the body causing the oxidative stress which can lead to various diseases including cancer.
People with dairy sensitivity can use ghee as alternative to butter and better tolerate it because with the removal of milk solids, most of the lactose and casein are removed as well. However, if you are allergic to dairy, it is recommended to avoid ghee due to presence of traces of dairy proteins.

Another benefit of ghee is that it has CLA (Conjugated Linoleic acid) which has been shown to decrease inflammation and promote heart health. In addition, ghee contains short-chain fatty acid, such as butyric acid (BTA) and medium chain fatty acids. Butyric acid is known for anti-inflammatory and immunoregulatory actions and provides energy to the cells in the gastrointestinal tract and promotes healing. BTA can also be found in animal fats, butter and plant oils, as well as produced by fermentation of bacteria in the gut in the presence of carbohydrates like fiber. People suffering from irritable bowel syndrome can benefit from BTA and reduce flare ups.
Medium chain fatty acids or MTC found in ghee metabolized faster than long-chain fatty acids, such as in animal fats. MCT gets eliminated from the body without being stored as fat. Other fat that has the same principle is coconut oil and is very popular among people following ketogenic diet and athletes.

Ghee is rich in fat-soluble vitamins A, D, E and K, as well as omega 3 essential fatty acid. Many people in the United States are deficient in vitamin D, which is crucial for healthy bones and teeth. Vitamin K together with vitamin D aids in improving bone density and provides better calcium absorption. Vitamins A, D, and E also play a role in the immune function and protect the body from harmful substances.
In Ayurvedic medicine ghee is often added to golden milk made of coconut milk, turmeric and ginger. Other spices can also be added to boost the flavor, such as cinnamon, cardamom, black pepper and others.

As you can see, the benefits of ghee are extensive; however, it is high in saturated fat and needs to be consumed in moderation. Dietary Guidelines for Americans recommend consuming less than 10% of saturated fat from total daily calories. Excessive consumption can cause the build-up of plaque in arteries and increase the risk of developing atherosclerosis which can lead to heart disease.

In conclusion, ghee can be used instead of butter or other fats and oils in cooking due to the high smoke point. The high nutritional profile of ghee makes it a good choice in culinary field. People with dairy sensitivity may use it with no adverse reactions due to removal of lactose and casein. Ghee can be consumed as a part of the balanced diet in moderate amounts to decrease the risk of developing cardiovascular disease.

View all posts by Mix and Match Nutrition 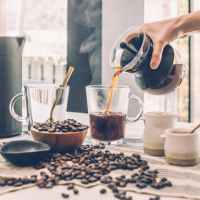